Mastectomy – Yes or No? 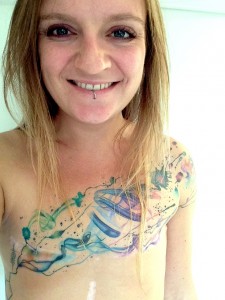 Being faced with the decision of whether or not to have a risk-reducing mastectomy is overwhelming. Traumatic. Frightening. Confusing. Unfair. The list goes on. It is without doubt, an incredibly complex and individual experience for each person. All I can do is tell you how I processed it, what conclusions I came to and hope that in some way it may help some of you facing this difficult choice.

I wasn’t expecting the breast specialists to advise me of surgery; I had just turned 24 and very recently diagnosed with LFS. I thought they would tell me to wait until I have children, or even until approaching menopause age, and then maybe do it as a precaution. But the day I had my breast consultation they told me my risk was 50% in the next 5-10 years. I asked my doctor outright ‘what should I do? What would you do in my situation?’ – they said that given the risk is so significant, they would do it. I mentally started weighing up the pro’s and con’s. Pro’s – one less cancer to worry about, giving myself a better chance at life, regaining a tiny bit of control over this crazy condition. Con’s – the aesthetics of losing my natural boobs, and giving up the ability to breast feed any future children I may have. But I realised that if I don’t have my health, everything else is irrelevant. I knew I had to do it before I’d even left the appointment.

I’m not saying it was easy. When I left the hospital and my family that had come with me that day, I went home, lay in the garden and sobbed. But I didn’t change my mind.

At first I opted for autologous reconstruction, using tissue from the tops of my thighs. I looked at pictures of similar reconstruction that my surgeon had previously done, went to a seminar by him, did lots of research, and felt reassured that I was in good hands. That was very important to me. It was to be a very long operation (8 hours or so), with a recovery of about 12 weeks. But I accepted that, because once I’d healed that would be that, worry gone. With lovely new non-murderous boobs I would be able to move on (as much as any LFS patient can). It was August 2013 and I was just about to start a degree, so I decided not to go ahead with it until summer 2014.

As it turned out, halfway through that year I had to have a liver resection and partial nephrectomy to remove a couple of tumours, which changed my perspective on life a bit. I was sick of being ‘in recovery’, the surgery took it out of me in a big way, and I had a sudden realisation that I didn’t want to spend another three months in bed, but I did still want to get rid of the risk of breast cancer ASAP. So I chose to have the mastectomy without reconstruction.

It was the right decision for me at that time. If I hadn’t had the liver surgery I may have gone along with reconstruction, and similarly if my mastectomy had been a few years after the previous op I may have had reconstruction then too. But given the way things unfolded, I know I did the right thing. I haven’t regretted my decision for one moment. In fact I’d go further, and say that I am grateful for the way things turned out, because of how much it has opened my eyes to society’s views on women and their breasts. A lot of people were very shocked by my decision and made it obvious that they thought I was making a mistake.

My fear is that women unable to have reconstruction due to health issues, treatment or finances are made to feel as though they are left with the most undesirable option. Like no woman would in their right mind chose not to have breasts. Well, if any of you reading this are in that situation, I chose it, and I like it.

Some of you will have had reconstruction and be unhappy with the results, or fear that the scars on your new boobs are unsightly. I want to say don’t be so damned hard on yourself. You’ve been through enough, be kind to yourself, love your body because it’s been dragged through the wars and is still standing, battle scars to show, and that’s awesome. You’re tough, and you’re great. Be proud of that chest, whether it’s flat, implants or made of tissue from one bit of your body or other, because you’ve been forced into an impossible situation, and you’ve dealt with it in the best way you know how.

Whether you decide to have a mastectomy or not, reconstruction or none, it is no one else’s place to say what you should do. A friend of mine recently had a mastectomy and chose to have reconstruction with implants – she feels the relief of being rid of future breast cancer worry too, and is really happy with her results.

It is not an easy decision to make, and it is helpful to talk to people that love and want the best for you, and those that have been there before. However, it is also important not to let anyone make you doubt your decision, whatever that may be. A surprising number of people questioned my choice not to have reconstruction, some even told me that I was making the wrong decision. But they aren’t me, and quite frankly, they don’t know. I did it anyway, and even got a big colourful tattoo over my chest to celebrate my scars and good health. Don’t be bullied or pushed into any decision you don’t feel right about.

It can be helpful to hear others stories, but they should only be taken as guidance, not as something to measure yourself by. It is an individual choice. Trust your gut.